Sky High is a 501(c)(3) nonprofit organization founded by Louisiana native, Brittany Hebert Franklin. Comprised of a devoted staff, board members, and an army of volunteers, we work tirelessly to support children undergoing treatment for cancer and other life-threatening conditions. Our efforts benefit leading hospitals and research centers by closing the gap in childhood cancer rates globally. The Sky High team is saving kids through advanced medical studies and healing families who are battling cancer now through our comfort programs.

The mission of Sky High is to bring communities together to provide comfort, fund research and save lives of those fighting pediatric cancer and other life-threatening conditions. 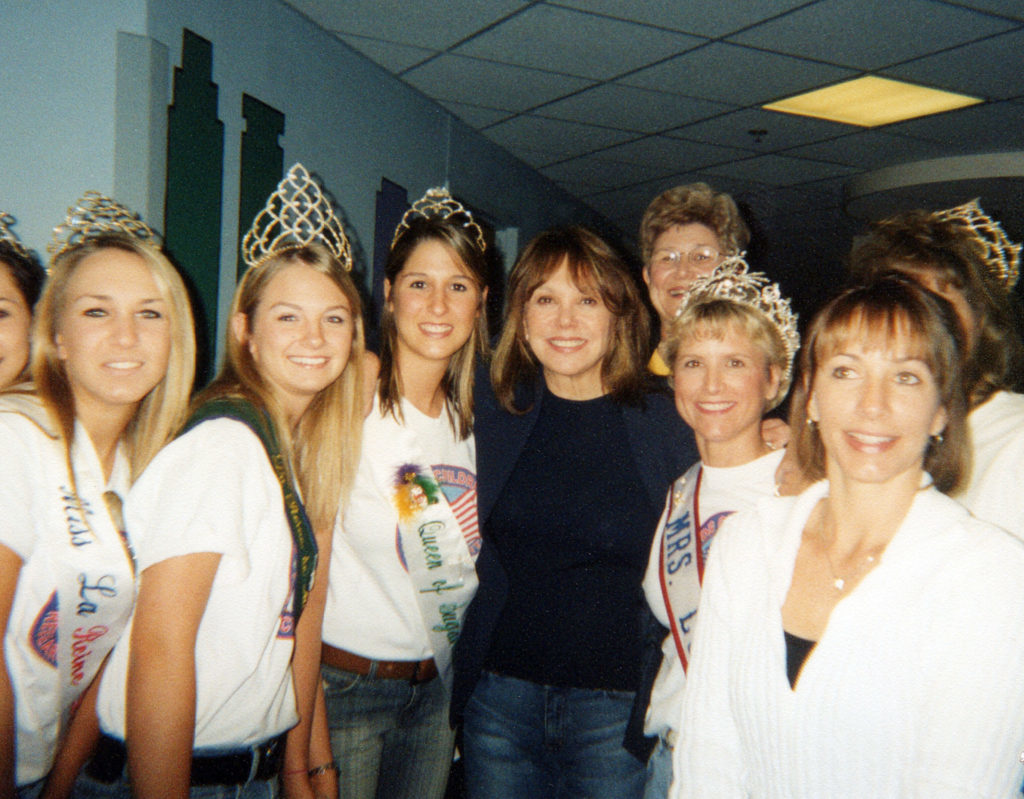 An impressionable 16-year-old hometown festival queen completed her reign and realized that being involved in the community was something she enjoyed. Brittany entered the Miss Acadiana pageant in Kaplan, LA and although she made first runner up, God had another plan in store. A few weeks later, she received a call asking if she would take the crown as the original winner forfeited her title by competing in another local pageant. Without hesitation, Brittany said “Yes ma’am!” Over the next few weeks, she would begin a journey that today she credits as God’s plan and would be shown her true vocation in life.

Read Our Full History
Our History: The long story

An impressionable 16-year-old hometown festival queen completed her reign and realized that being involved in the community was something she enjoyed. Brittany entered the Miss Acadiana pageant in Kaplan, LA and although she made first runner up, God had another plan in store. A few weeks later, she received a call asking if she would take the crown as the original winner forfeited her title by competing in another local pageant. Without hesitation, Brittany said “Yes ma’am!” Over the next few weeks, she would begin a journey that today she credits as God’s plan and would be shown her true vocation in life.

Pageant director, Billie Menard encouraged each of her regional queens to solicit donations for St. Jude Children’s Research Hospital. Billie called the group “Beanies for St. Jude”. With their crowns and sashes on, the girls would stand on the street corners of Kaplan, LA with buckets asking for donations. The queens were also encouraged to collect as many Ty® Beanie Babies as possible to give to the patients during their visit. Brittany was in luck because her grandmother, Ora, collected beanie babies for years!

A caravan of parents drove the girls to Memphis, TN to host a Mardi Gras carnival at the Ronald McDonald House Charities Memphis and donate their $5,000 check to St. Jude. Brittany vividly remembers walking into the RMH and seeing all of the kids with no hair and she couldn’t quite understand what was really going on. Of course, the girls were told they were raising money for kids with cancer at St. Jude, but what did that really mean to a kid who had no exposure to this type of disease? During the carnival she connected with Dalton, an 8-year-old boy undergoing chemotherapy treatment who hadn’t eaten in days. She encouraged him to try the chicken and sausage gumbo that the Beanies had prepared for the 52 families to enjoy. Before she knew it, Dalton had eaten the entire bowl of gumbo. Brittany saw tears stream down his parent’s face and it was at that moment that she could see the impact she made. Brittany considers that moment as “the seed that God planted” and she decided it wasn’t fair that kids had cancer. This visit would change Brittany’s life forever.

The next day, the Beanies toured St. Jude’s and donated the $5,000 but on their way out, Brittany noticed two security guards at a doorway. She introduced herself to the guards and told them the purpose of their visit and asked: “who is in that room?” The two security guards told her, “We will be right back…” Never in a million years would the Beanies believe what would happen next! Marlo Thomas walked out to greet, thank and take photos with the small-town pageant queens who just donated $5,000 to her father’s dream. (See photo link)

Brittany founded Sky High eight years later after being challenged by former pageant director, Billie Menard, to raise $10,000 for the very hospital that made such an impact on her. Contemplating the idea of a fundraiser while working two jobs and studying for the LSAT made her nervous but after thinking about Dalton, she made the decision to host a sporting clay tournament during her senior year of college.

On the steps of the ULL library with notebook in hand, she started to combine her knowledge of sporting clays and created a fundraising budget after contacting the Wilderness Gun Club in Lafayette, LA. This was the same place she shot clays on the occasional Friday. Soon after her plan started to come together, it was time to create a name for the fundraiser and on the couch of her college apartment, memories of family hardships kept reminding her of the sky. Brittany overcame serious family adversities including her mother’s struggle with drug addiction, father’s battle with PTSD after a helicopter crash in 1989, and a house fire that had her family crawling out of a window for their lives. Each time, she would look up at the sky and ask God for continued strength. Additionally, she connected with the fact that one shoots sporting clays “in the sky.” Brittany was soon shouting “Sky High! Sky High for St. Jude. That’s it!!” The next morning, Brittany took her $100 bill to Chase bank, opened an account and received a business tax ID number in order to start collecting donations. After searching the internet for an image that would “brand” the tournament, she joined forces with a few of her past festival queens, Troy Theriot and Steve “Sunset” Miller. The first bright orange flier hit the streets of Lafayette and she waited for the feedback.

It didn’t take long for donations to pour into Sky High, the first was from Donald Mosing of Frank’s Casing Crew. This is when Brittany realized that she needed some help from her powerhouse best friend, Christl Mahfouz. Christl quickly helped create a cutting-edge flier, secured a billboard on Hwy 90 from LAMAR, and told Brittany that she needed a website. From that moment forward, the two “chickens” were on a mission to end childhood cancer.

Three weeks later, the website launched and Sky High had over 30 teams registered. A raffle cart was donated by Pat & Greg Case, the previous owners of Cajun Carts and they had over $20,000 in the bank account. While the girls were on a beach vacation in Destin, FL, Hollie Citron told everyone about the launch of Sky High. Next Jill Proudomme informed the girls that her nephew, Bryce Norwood, was receiving treatment at St. Jude and that she was willing to help. Now, their group of two became six, and this would launch into something that Brittany never imagined. After 3 months of preparation, on August 18, 2007, Sky High hosted one of the most fun, impactful and memorable events in Lafayette, LA! It included 300 participants, 10 cooking rigs, her grandfather’s Cajun band and a live auction where $50 Academy gift cards sold for $2,000! The girls netted $50,000 for St. Jude Children’s Research Hospital and the rest is history.

Immediately after hosting the clay tournament, Brittany received several job offers to join the oil and gas industry and relocate to Houston, TX. However, accepting a job offer would mean leaving ULL during her final semester and deferring law school, so she prayed hard about the decision. All signs pointed to Houston and despite all intentions to attend law school, she knew that God wanted her to continue the work he had planned for her all along: Sky High. With the help of Michelle Hebert, who handed Brittany $400 and said “Pay it forward” she packed a U-haul truck and hit I-10 to start her career at Pegasus International and begin building a nonprofit organization.

On October 5, 2007 (Brittany’s Birthday) Christl gathered the girls, or current Board of Directors, at Paul Breaux’s office in Lafayette to sign the Articles of Incorporation and submit the 501(c)3 application to the federal government. They would then plan their visit to St. Jude to deliver the proceeds from the tournament and Sky High and Beanies for St. Jude would hit the highway once again. During their visit, it all came back to Brittany; the seed that God planted eight years prior would now sprout. After handing over a $50,000 check in front of the St. Jude statue, 5-year-old Bryce Norwood rolled up in his red-flyer wagon with his parents, Dean and Alicia; Jill’s nephew…and he quickly became friends with his “Sky High girlfriends.” Over the next couple of days, the girls learned that sweet Bryce was battling Wilms Tumor and was terminally ill; there wasn’t much time left. Dean told the girls his dream before his son died was to enjoy a family weekend at a Texas ranch whitetail hunting. Christl contacted Mr. Donald Mosing and within one week, the entire Norwood family was on a private plane headed to 4M Ranch in Uvalde, TX. That weekend Bryce, his family, the Mosings and his Sky High girlfriends would share a weekend that no one would ever forget. Bryce and his father were able to hunt whitetail, dove hunt, dye Easter eggs and Brittany vividly remembers falling asleep on the grand room couch each night with Bryce in her arms. Alicia told Brittany that Bryce had not asked for morphine one single time before bed, she thought that Brittany must have comforted him that much during the trip.

On February 5th, Brittany received a call from Dean Norwood asking for the girls to travel to their home and visit Bryce one last time. The next few days were tough for all of the girls but especially for Brittany. While visiting, she got an inside look at what a family goes through at end of life for their child and also witnessed a child in unbearable pain. At one point, Brittany told Bryce that she had to go back to Houston and Bryce replied: “Can’t you call your boss and tell him that your with a St. Jude kid that’s going to see Jesus soon?” So Brittany did just that. She called her boss, Tom Sneed and asked for one more day with Bryce.

On February 14th, many people celebrated Valentine’s Day, in fact, Bryce celebrated his 6th birthday but he did so at the gates of heaven. After Bryce’s funeral, Brittany promised Dean and Alicia that she would build an empire that would end childhood cancer. From that day forward, Sky High for Kids has never given up on the fight for over 300,000 families diagnosed each year.

Each year, Brittany’s vision has grown and Lafayette became Houston, San Antonio, Midland and soon enough, Sky High for Kids would be doing their good work nationwide to fulfill their vision of ending childhood cancer once and for all.

Staff
Board
YP Board
JR. Board
Ambassadors
Menu