As told by her father, Brandon 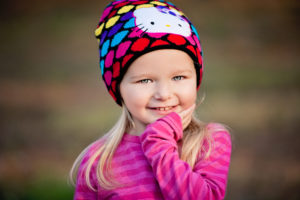 Rorie was diagnosed with Hypodiploid Acute Lymphoblastic Leukemia (Hypodiploid A.L.L.) at the age of three. One afternoon, we noticed that Rorie had a fever that would continue off and on for a week or so. At this time, we took her to the pediatrician who requested a blood draw and full screening. Her primary care physician called and advised us that her levels appeared to be an error and there must have been something wrong with the sample and to retake the test. The following day we received another phone call that the levels still appeared to be off, and that we should take Rorie to Texas Children’s Hospital (TXCH) for further review. After making a quick trip to TXCH for lab work, we were sent home and that same evening were notified that she had a form of blood cancer. Her initial diagnosis was Acute Lymphoblastic Leukemia, and we were told to pack a bag and head straight to TXCH for an undetermined amount of time.

She immediately started chemotherapy. After that series of treatments, they evaluated her status once again. Her body was not reacting to the chemo like they were hoping, so they dove a bit deeper and found that she had a chromosome disorder changing her diagnosis and treatment. The new diagnosis was called Hypodiploid A.L.L. which had a very small chance of survival. The treatment was much more intense requiring chemotherapy, radiation, and a successful bone marrow transplant.

Neither myself, her mother, nor my other daughter were close enough matches to be her donor, so we went to Be The Match. After combing through their databases, the doctors advised us that there were a few good candidates, but none that were considered a perfect match. So, with the help of family and friends, we started nationwide bone marrow drives to get folks tested. These drives added 25,000 donors to the registry, but we never found a perfect match. After a few months of prepping her body (chemotherapy, radiation, and dozens of medications to break her immune system down to nothing), the doctors selected what they hoped was the best candidate, and Rorie underwent her first bone marrow transplant.

100 days is the benchmark for a successful transplant. This is when a recipient’s body should start to mimic and recreate the donor’s marrow. Rorie’s body started to reject the transplant midway through. The doctors advised we do a “top off” which is another small dose of marrow from the donor to try and spark her body for a better reaction. That attempt failed as well. The only thing we could do was try to select another donor and repeat this process. We selected another donor for her third bone marrow transplant, and she underwent that procedure. This time we almost made it to day 100 when signs of cancer started to appear again. During this process Rorie’s body started to give up on her. All the side effects from chemotherapy, radiation, and medication impaired her lung function. Her oxygen levels started to get lower and lower, requiring her to be put on a ventilator and sedated. After a week or so, she stopped breathing on her own. She passed away five days after her 5th birthday. She fought for two years and never stopped smiling through any of it. Her smile was infectious, and I am just so proud that I was special enough to be called her Dad. 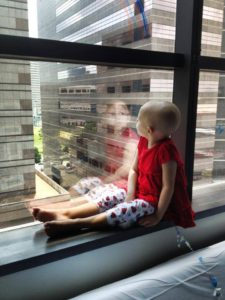