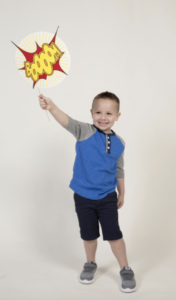 My name is Erin Cones and this our five year old son, Crew. I work for Ashton Gray Oilfield Services, LLC.

To be honest, I wish I didn’t have to tell you our story. More than anything though, I hope one day, no parent will ever have to tell stories like these again.

Our story began early in June of 2015. Crew was two years old and we’d recently started a Soccer for Tots program – it was his first extracurricular activity and we couldn’t be more excited. In the event we had a Michael Phelps in our hands, we also signed him up for a swimming program at one of the neighborhood pools that summer.  Little did we know, it would be a long time before we were ever able to enter a public pool again…

Soon after we began these programs, we noticed that Crew’s legs had a large amount of bruising, his appetite was diminishing, and his energy was steadily decreasing.  There was an eerie gray tone to his skin and his cries for “mommy” throughout the day began to haunt me.  We scheduled a visit to the pediatrician and basically demanded bloodwork for Crew that day since she only diagnosed him with a simple ear infection.

Gosh, if only it were that simple. Turned out that simple ear infection was something way bigger than we ever anticipated.

Friday, July 3, 2015.  Crew’s two and half year old birthday.  We received a call from the diagnostician at Quest asking us to make a trip to Texas Children’s Hospital in the Medical Center.  There were some numbers they wanted to retest, and with the holiday weekend, felt Texas Children’s was the only facility capable of turning the numbers around in a timely manner.  I remember walking into the ER admitting area.  It was like we were royalty.  No long wait, and we sped through the paperwork like it was nobody’s business.  In hindsight, this is because they all knew, but we were still clueless.  Within the hour, a doctor came into our room, and told us, “There is a 95% chance your son has Leukemia.” With a Hemoglobin of 1.8, white blood cell count of 108,000, enlarged spleen and liver, and 80% Leukemic Cells in his peripheral blood, there wasn’t much time to think about our situation. It was time to react.  We were lucky our child was still breathing. In a few short hours, we were on our way up to the Pediatric Intensive Care Unit.  All three of us curled up in a bed in the PICU – machines, nurses, doctors, the sense of urgency alone was terrifying…and I think in the back of our minds, both my husband and I thought we were going to lose Crew. However, we woke up that morning, after a long night of multiple blood transfusions, and our little boy was back into action.  Smiling and dancing with an IV in each arm – there was absolutely no way we were going to lose him.  God makes no mistakes, and at that point, we united in strength as a family to Kick Leukemia in the Face.

Later in the week, Crew was diagnosed with Very High Risk, Pre-B Cell, Acute Lymphoblastic Leukemia.  Given his age and diagnosis, we were told that Crew’s likelihood of remission was extremely high.  The chemotherapy began very quickly – and so did Crew’s response.  After 8 short days of treatment, the Leukemic Cells in his peripheral blood had diminished completely, but the battle wouldn’t stop there.  His treatment plan would be a minimum of three and half years – and still moving on adrenaline and caffeine, didn’t have much of an idea what that would be like for us.

The past three years have been filled with an infinite number of commutes to the hospital, infusions, lumbar punctures, dressing changes, hospital stays, an endless amount of medications, another endless amount of medications for reactions from those medications, pokes, pricks, numbing cream, surgical procedures, vomit, blood and platelet transfusions, hair loss – but by far, the worst part has been watching our child be the one to endure all of this. The agonizing cries, the pleas for not letting them poke him, watching them hold him down for procedures, seeing the neuropathy in his feet from some of the chemo, having to undergo another port implantation because his first port eroded through his chest, feeling helpless as he’s hooked up to machines, just the tears he’s shed alone – as a parent, we would do anything to trade places with him.  However, I don’t think his dad or I could have battled this beast with the amount of courage and strength this little miracle has shown the world.  We have watched that two and half year old boy quickly become a five and a half year old man.

Many people ask me how I stay so strong, how I keep such an upbeat attitude…make no mistake, this has nothing to do with me. Our journey is led by this powerful ray of light and his positive approach to all of adversities. He’s an innocent little boy who’s spent over half of his life making this painful experience seem fun.   Our situation may seem unfortunate, but we are blessed. Crew’s 1,228 day battle with Leukemia will come to an end this November when he rings that bell.

We may not have had such a favorable outcome if weren’t for our team of doctors and the amount of research they’ve been armed with throughout the years. Research takes money. Hospitals take money. Let’s face it – disease takes money. If it weren’t for organizations like Sky High raising this money, we may not be in this position.  Everyone has their perception about nonprofits.  We had to laugh when Crew saw a St. Jude’s commercial a few months ago…he saw the bald headed children and said, “They’re just trying to get our money.” This is my five year old child WITH Leukemia.  Rest assured, as his mother in the cancer parent business, there aren’t more tangible assets for me than Sky High’s contributions.

I wish these women didn’t have to raise money for this cause. I wish Pediatric cancer didn’t exist. Unfortunately, it does. Thankfully, these nonprofit ninjas are pediatric cancer game changers and our family now feels like part of theirs.  We can’t say enough about Brittany and her team’s impact in the community.

Crew and I aren’t giving up for a cure, and I know Sky High has our back.  I am grateful for their insane amount of energy and for partnering with organizations that help families like mine every day.  Thank you for joining in our fight to help us Kick Leukemia in the Face.